Tales from The Portal

We at Gosschalks have submitted our own HMRC Portal claim this lunchtime (20/04/2020) so thought we would share our experiences with you (and the experiences of some clients who have also already done so).

We did so not as experts in tax or payroll, or in the certain knowledge that we know what HMRC are going to pay out but simply as a business which has been through it and who can perhaps help you to do the same.

First impressions? Straightforward enough. We got through it anyway and, once we got into the swing of it, it took about 40 minutes, and that’s with us having to manually enter the names, NI numbers and Payroll numbers of 61 staff (but more of that later). There is a ‘web chat’ function on the right hand of each screen of input which allows you to type a question to HMRC. You join a queue before you are answered – but one client told us they were pretty quick in responding. Another client mentioned, having found out the hard way, that If you wait more than 15 minutes between inputting key-strokes on the portal it times you out and you have to re-start the whole process.

There are some preliminary questions about your HMRC UTR (Unique Tax Reference number) and it asks whether all the money is going to the staff – presumably because they don’t want company directors immediately declaring dividends on the back of it. Technically the answer is ‘Yes even though some of it goes back to HMRC as tax and NI’ but we ticked the much simpler ‘Yes’.

What furlough period is your claim for it asks ? You declare one start date and one end date for your ‘claim period’. We submitted from the first date of an employee being furloughed in March, through to the end of April. We did so on the basis that you can only make one claim per period and should do so before or during payroll.. We can also tell you that the system allowed us to enter a future date for the claim period, and so we matched the date to our month end payroll date for simplicity. We have been told you can’t go any further into the future than April 30th although we didn’t try. We’ve also heard unofficially that you cannot go more than 14 days into the future, so you wouldn’t be able to claim for all of May on May 3rd say, but we have no first-hand experience of that.

Anyway you quickly enough get to this screen copied in below and which you obviously need the answers for at hand. 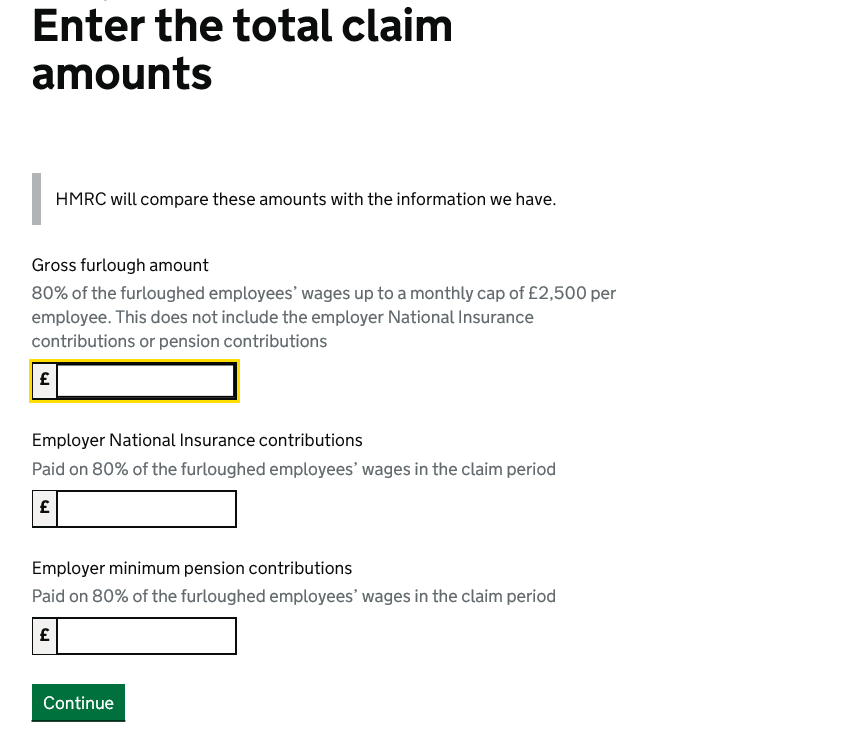 Then after summarising the above into a single figure you get to the screen below. If you have over 100 people on furlough you can import that information we understand. We have 61 employees on furlough so it was a bit laborious but we got through quick enough, even with us putting in the optional payroll number. But you do not have to enter individual furlough claims for each member of staff separately – you’re already done with the maths and figures of the claim by this point. 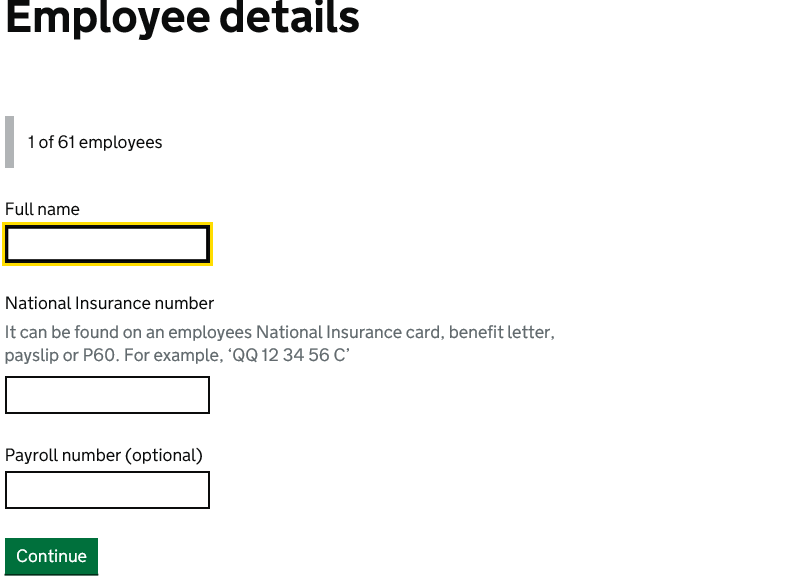 Then that was it. No questions whatsoever about the process of putting the staff on furlough. As you may know there has been considerable concern that the goalposts were about to be moved when last week, for the first time, it was suggested that you needed written agreement form the staff being furloughed, not just to the pay cut but also to the whole concept of being put on furlough leave. Possibly even that you needed that written agreement in advance of furlough. None of that features in these questions, nor do issues about whether the staff may have been on holiday in that period, whether they were on furlough because they were shielding etc. You do not have to upload documents. There is quite simply nothing of that type. We had as I say feared the worst and had put together our own COBRA team of crack lawyers ready to challenge decisions based on any unfair requirements that had only been mentioned late in the day. We have stood them down and they have now gone back to pacing about their respective living rooms like magnificent lions in a zoo nobody can visit. Well ok maybe not.

That does not of course mean that you should not retain relevant documentation and be able to evidence a clear audit trail about furlough. There will be audits and inspections in the coming years and it is entirely right that this should be the case – the Government has implemented a scheme which is designed to be as accessible as possible to get the help to employers as quickly as possible and unfortunately that means the scope for fraud is considerable.

There are stories circulating about the system crashing, about the calculator function failing and about the RTI payroll cut-off date being wrong but we have not been told this first hand by any of our clients. Generally speaking the experience has been positive. But then the money isn’t in anyone’s account just yet.

Although we submitted our claim today, it is perfectly possible that you may submit a claim as close to the payroll processing date as possible. In doing so you would also avoid many of the questions above re potential movement of selected furloughed employees between the date of submission and the claim period end date. The drawback of this of course is that you will have a longer lead time between salary payments going out to your employees and your furlough rebate.

Hopefully this helps. These are just our experiences and the experiences of a few clients. We are not experts on tax or payroll matters and can only recommend that you speak to your accountants, tax advisors or payroll providers if necessary.

Keep safe – it’s still all about health and people’s lives and not the money.


To recap - what you need to have to hand

COVID-19 and Commercial Contracts: The 10 most important questions answered

Making a Will during the Coronavirus (COVID-19) pandemic

Although we make reasonable efforts to update the information on our site, we make no representations, warranties or guarantees, whether express or implied, that the content on our site is accurate, complete or up-to-date.